Best Rain Shower Heads: Imagine coming home to a refreshing and soothing shower after a very busy day at work, or an intense workout in the gym. Sounds exciting, isn’t it? Who wouldn’t want to take a revitalizing bath after the day is over and done with?

However, doesn’t it feel almost depressing if your shower head gives out only a stifled stream of water? Instead of relieving all your stress, it aggravates that sense of frustration.

To get rid of such issues, it is advisable that you buy the best rain shower head made by leading bathroom furnishers. A rain shower gives you a drenching, liberating feel – like the one you get when you bathe in rain itself! (We bet a lot of you did that when you were kids or teenagers!) 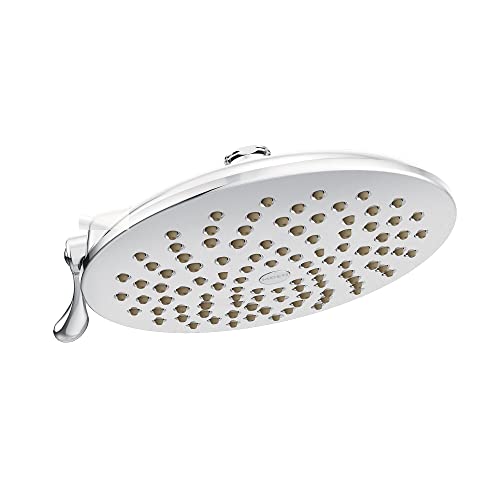 The S6320 Velocity rain showerhead from Moen provides outstanding coverage and a soothing shower experience every time you turn it on. The large 8-inch diameter of the shower head and customizable water pressure ensures plentiful and constant water flow. This is made possible by two interchangeable spray modes. The S6320 Velocity also features an Immersion technology. It intelligently self-regulates the intensity of water flow to give you a thorough shower. There are a total of 100 nozzles that ensure up to 2.5 gallons per minute of gushing water flow. 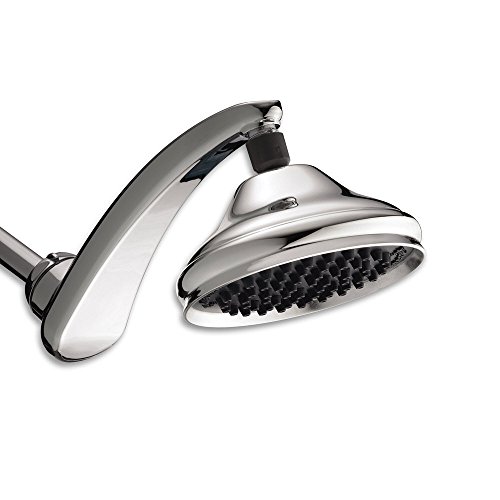 If you want a rain shower head that has all the good features in a budget package, the Waterpik RPB-173 is for you. It has a 6-inch wide circular shower nozzle area and OptiFLOW technology to provide you a refreshing shower every time. The water is ejected in a high-pressure massaging action that drenches and massages your whole body continuously. The adjustable wall-mount shower arm lets you regulate the height of the shower easily. It is also easy to install and easy to remove without a trace from the bathroom wall.

The Hansgrohe 27474001 Raindance is one of the best and most advanced rain shower heads available in the bathroom furnishings segment. With a huge 9.4 inch diameter, it ensures your entire body receives the same pressure and volume of water. It has a special air-infusing technology that automatically enriches each drop with air to make it bigger and more effective. This rain shower head also features the anti-calcification QuickClean™ utility, which simply removes Lime deposits. You can just rub each of the elastic silicon nozzles to clean them out. 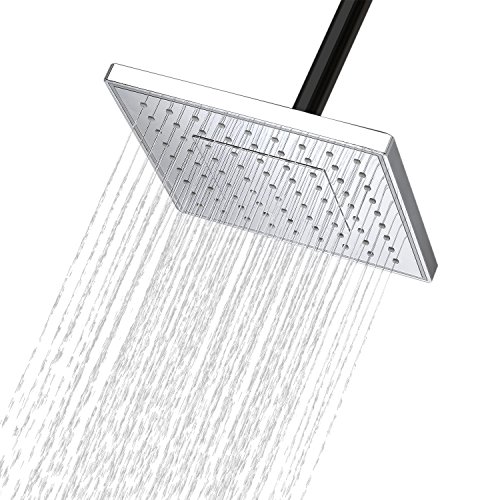 If you need a rain shower head that is cost effective but does not compromise on product quality and features, the AKDY AZ-6021 is perfect for you. It has an 8-inch, square, plastic surface that covers a large surface area at the same time. The sleek design bonds practicality with aesthetics and delivers an eye-catching piece of bathroom equipment. Besides, there are 100 water nozzles that are easy-to-clean and rubberized to prevent lime accumulation. An extendable, angle-adjustable shower arm (available separately) provides ease of use as well. 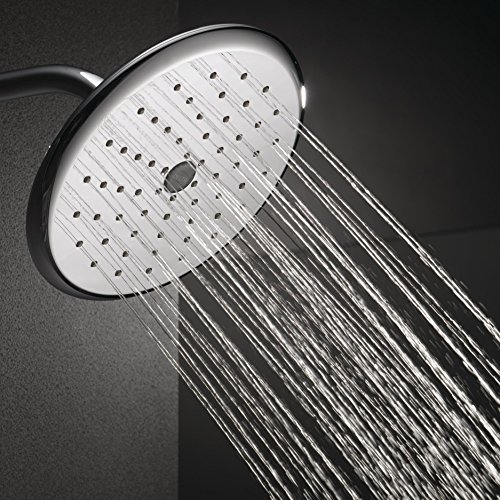 The Delta RP52382 Raincan is built to evoke the drooling looks from anyone who sees your shower cubicle! With fluidic curves and rounded off edges, this shower head looks like a piece of art in itself. The Delta RP52382 is a single setting shower head with an 8.8-inchcircular face that covers a large surface area with its powerful spray. It also features 100+ water nozzles with easy-cleaning technology. You can clear any accumulated dirt or iron with just a single touch! The water stream flows at a rate of 2.5 gallons per minute, creating a soothing and massaging shower exclusively for you! 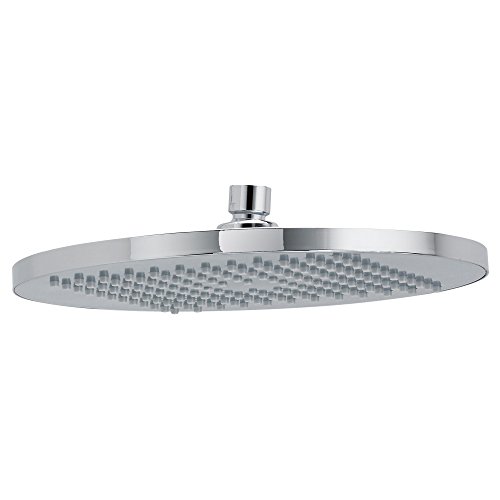 Allow your body a soothing, revitalizing shower every day! American Standard is one of the leading bathroom furnishing equipment producers. The AS 1660.683.002 is a large, 10-inch wide circular rain shower head with over 150+ nozzles. All this to give you the most refreshing shower ever! With a water flow rate of over 2.5 gallons per minute, the numerous nozzles create an intense, pressurized shower stream that feels like rain-drenching itself! All the nozzles are easy-clean nozzles to assure easy cleaning and durability. 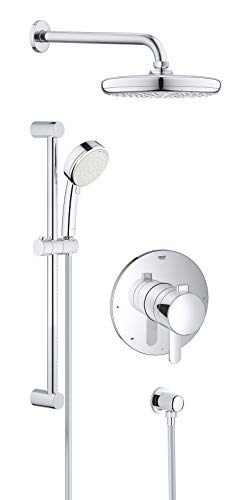 One of the most innovative rain shower heads available in the market currently, the Aquafaucet rain shower head comes with a thrilling addition – blue LED lights! Imagine the effect it will have in addition to the soothing rain drenching effect of the shower; you get the picture, right? The square shape and 10-inch square area assure that the shower streams cover a large surface area uniformly. Also, the shower head is made entirely of stainless steel, which makes it resistant to rust and allows zero corrosion. 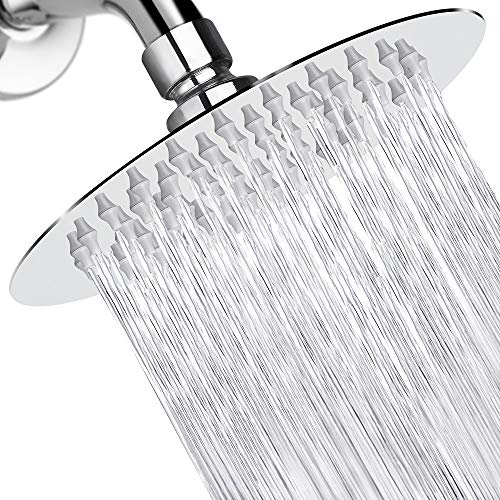 The Thunderhead rain shower head is a high-pressure shower head that can provide a highly pressurized shower stream. This gives you a soothing, massaging feel all over your body when you take your daily shower. The final effect – a refreshing, revitalizing shower to relieve your stress and invigorate you every time! The 3.0 GPMhigh-pressure stream flows through 100+ touch-clean water nozzles which ensure even water flow rate from all outlets. This rain shower head also comes fitted with height and angle adjustable shower arm and flange right out of the box! 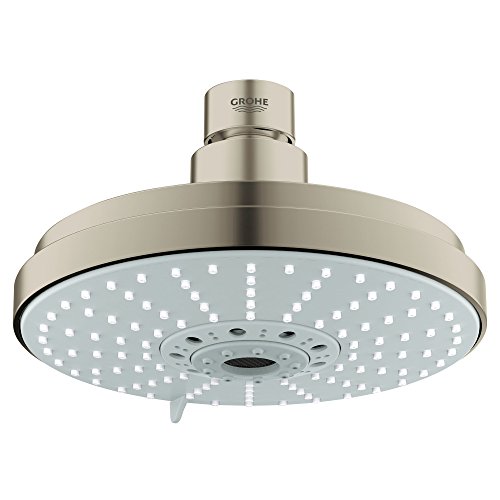 The GROHE Cosmopolitan rain shower head is an innovative four-in-one shower head that allows you to select from multiple water discharge modes. It has a large 8-inches diameter that makes sure your entire body is covered in a soothing shower whenever you turn it on! The shower head has 160 easy-clean water nozzles that eject a uniform, pressurized water jet for a soothing shower experience. The easy cleaning nozzles minimize your efforts in maintenance and ensure the durability of the shower head. 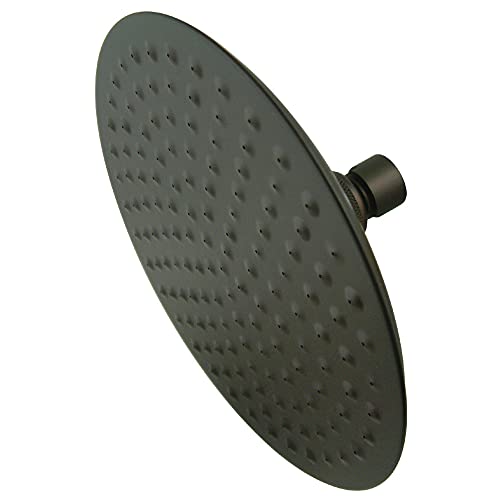 The final entrant on this list is a high-quality rain shower head from Kingston that looks as good as it performs! It has a standard 8 inches shower face with 160+ water channels (nozzles) that give out a highly pressurized, precise jet of water. It is made in compliance with California Energy Commission specifications to ensure an environment-friendly presence. The shower head can handle a maximum outflow of water at 2.5 GPM rate at pressures of 80 Psi constantly. This makes sure that the ejected water stream is continuous and uniform enough to provide you an invigorating, massaging water stream all the while.

When you buy or have a house built for yourself, one of your foremost concerns is (and rightly so) a bathroom that serves you well. Among other amenities, a fully equipped bathroom that offers you all you need to relax and refresh yourself after a long and tiring day is necessary.

Imagine if you had to return from a busy and tiring day at work, to a cramped bathroom with basic fittings that do not give you the refreshing wash you need! Feels disgusting, isn’t it? We know it does.

Among the basic things you need to furnish a comfortable bathroom, is a shower cubicle with a comfortable shower. After a lot of tiresome work, all you feel like is a refreshing shower, good food, and some sound sleep. To take care of the first need, you will need quality shower equipment that delivers you that soothing feeling when you go in for your shower.

Let’s discuss in brief the basic types of showers and provide a comprehensive buying guide to help your cause. This will serve as a reference guide when you buy showering equipment for your bathroom.

Basically, showers are of many different types. Each one serves a different purpose and is beneficial for specific requirements. The types are as follows:

Shower heads can also be differentiated according to their spray patterns to help you choose the one you actually want. This differentiation can be done as follows:

To differentiate between rain shower heads and normally fixed shower heads, it is necessary to know the basic technical specifications of both these types.

However, what makes it stand out, is a low-pressure water outflow that gives a relaxing, shower feeling, similar to rain. When you stand under a rain shower head of good quality, you will feel the difference instantly. It is more like a luxurious shower that you often get in spas or parlors.

It is important to make one fact clear – rain shower heads need a larger bathing space because of the larger surface area that it covers when turned on. Rain shower heads, whether circular or square, have a larger surface diameter (or width, depending on shape) to facilitate complete showering. This allows rain shower heads to perform their expected function of delivering vertical, rain-like water flow instead of a concentrated stream that is spurted right at you.

In case you are worried about the expenses behind installing a rain shower head, they are clearly more expensive than stock shower heads providing normal showers. Also, maintaining rain shower heads is a tad more difficult than doing the same for normally fixed shower heads. They also require more additional parts to extend the actual shower head away from the shower wall.

Are rain shower heads worth it?

You might be wondering whether it is at all logical to invest in a rain shower head when it provides less water pressure than normal fixed ones. However, the best rain shower heads from reputed manufacturers are normally mixed ones that combine the advantages of both.

Additionally, rain shower heads also need effectively less maintenance than other shower heads. Most of the best rain shower heads come with100 or 150 plus nozzles that have an easy clean feature. You can clean these nozzles just by touching or pushing in all the rubber cleaning heads together.

This operation removes any dirt, lime scale or iron accumulations that might have formed inside the shower head. This feature lets you use rain shower heads even in regions that supply hard water containing more contaminants.

If you have a bathroom that is large enough and can afford space for a sufficiently spacious shower cubicle, we suggest you go for a rain shower head. These will benefit you in the long run by minimizing water usage and maintenance costs effectively. All you need is the right equipment.